We in DL are currently a little bit handicapped regarding our longwave activity due to the limited power output. Many other stations can not set up large antennas necessary to achieve signal good enough to be heard in conventional CW.

To overcome this limit, many stations use so-called Slow-CW to operate on longwave. Slow-CW allows signals to be detected that are far below the noise level and that can not be detected by ear. A computer is needed to make a part of the audible frequency spectrum visible. The eye is used to detect and read the signal.


A little bit of Theory

Most CW operators know, that the human ear can detect signals, that are below the general noise floor, if the ear has been trained for years. A sense that is even more sensitive, however, is the human eye. Very thin lines on a computer screens can be detected, even if the entire computer screen is scattered with noise. Additional measures, such as a statistical reduction of the noise by long-time signal averaging can help even more to get thet little thin line out of the dark. Signals 20 dB or more below the noise floor can detected using this method!

What we need to do is to convert the audible spectrum into a graph on the computer screen. We can make use so-called AF Spectrum analyzers, that use a mathematical model called "fourier analysis" to perform this task.

Fortunately, we do not need to be experts in mathematics, since other people already had other applications for audio frequency analyzers, and the software ahs been already written. Some software samples and their specific application is described below.

To make use of Slow-CW, the length of one dot needs to be much longer than the normal dot we know from conventional CW. In the beginning of longwave experiments, extreme slow CW signals were transmitted with dot-length of 100 seconds or more. To transmit the call DA0LF back in 1997, that was detected in the U.K. in, DJ8WL (sk) needed a total of nearly an hour. This was ok for a beacon transmissi 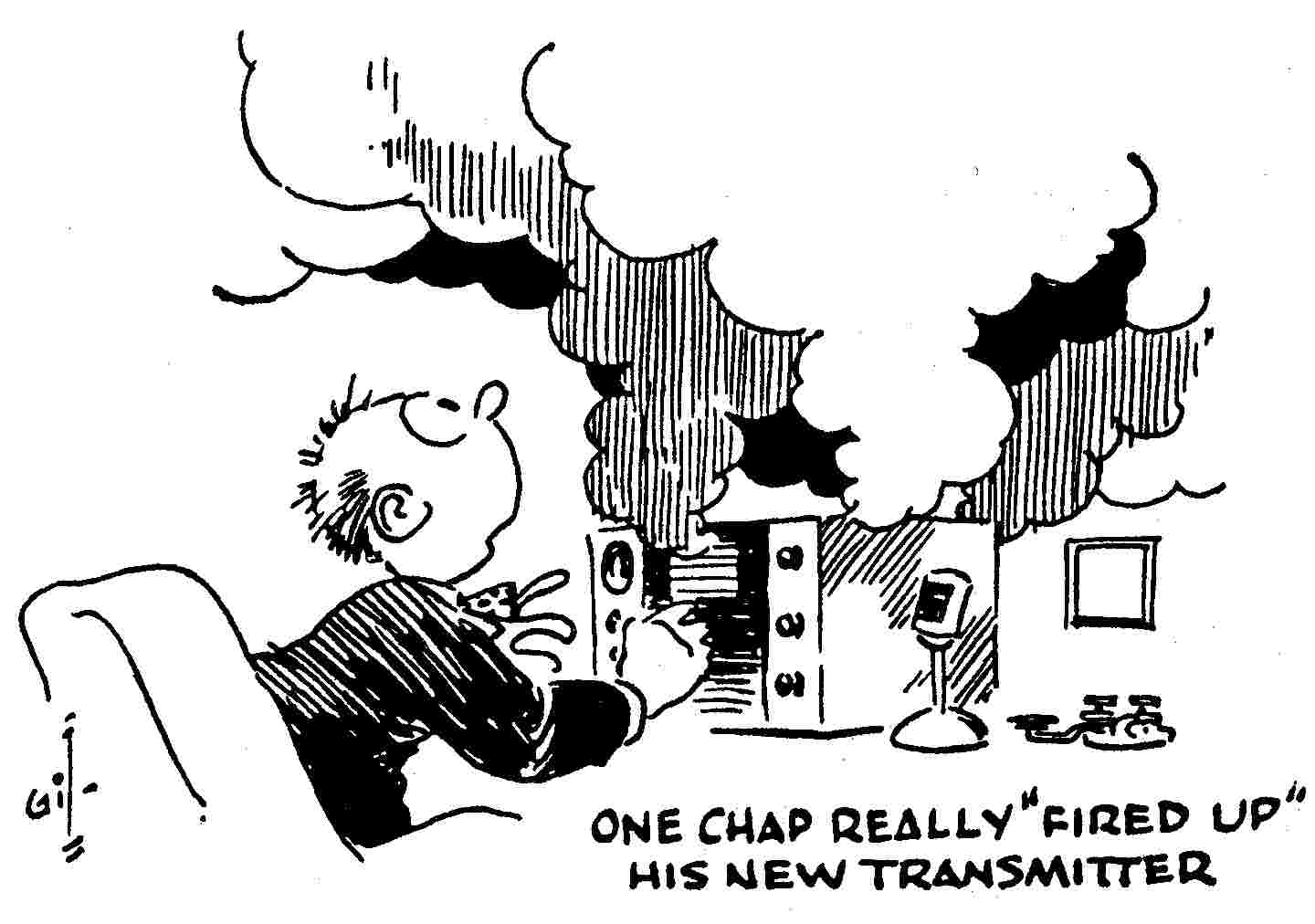 on to verify, if a weak signal could be detected over hundreds and thousands of kilometers, for a QSO between two stations such a long dot lentgh would be impractical.

Nowadays, typical dot length between 3 and 5 seconds have been established to do the job. A cq-call with 4 seconds takes about 7 or 8 minutes, a complete QSO can easily take between 1 and 1 1/2 hours.

One word of caution: the long dots and dashed might lead to serious cooling problems!

Several software packages are available, depending of course on the hardware used. While specific audio frequency analyzers exist that require special hardware, such as DSP modules, there are some programs available that work with a normal soundcard which is part of state-of-the-art computers. Since Microsoft Windows is a popular operating system, most of the software available has been written for this system. Other operating systems such as Linux are supported by other programmers. I use a Windows-based system, so I concentrate my inforation on the most popular program used by Slow-CW enthusiasts, Spectrogram, that operates under Windows 95 and 98. In the beginning I used the so called "radio version" of Spectrogram (4.2.6.5) which allows to slow down the display ("dwell") to be able to read a complete callsign on the screen (for examples, have a look here).

R.S. Horne, the programmer of Spectrogram has has now release a new Spectrogram Version 5.0.5, which replaces all existing Windows 95/98 versions. It works very fine and has additional features that are very useful for us.

Simply connect your receiver output with the input of your soundblaster card and start the program. Maybe you need to put an AF transformer in between to avoid 50 Hz hum passing through. Levelling is sometimes a little bit tricky, I have included a 1:10 potentiometer to be able to fin-tune the audio level.

When you start Spectrogram, you will be asked for some parameters. I am still experimenting with the 5.0 version, but currently my favorite parameters look like this: 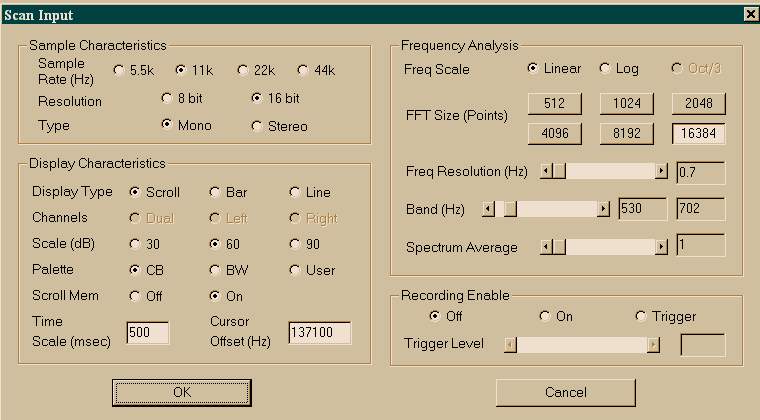 Mike, G3XDV has some more hints and ideas on the new features of Spectrogram 5.0. Also Michael, PA3BSH has got some interesting contributions.

Although QSOs have been reported in which the orse key was held down by hand using a stop-watch, it might be more convenient to have the dots and dashed being generated automatically. Again, there is software available that is DOS or Windows-based.

I personally use the software QRS written by ON7YD. It comes with a good "help" function that exlains the setup and the use very clearly. Also the necessary hardware (a simple transistor) for keying the transmitter through the COM-port is described. If you own a "Hamcom"-modem, you can use this for keying.

A cq call as well as the QSO is kept as short as possible, for example

A report is given in a system consisting of three letters, either

and as a reply

If conditions and time allows, more information can be provided, such as QTH locator, name or "MY 1ST LF QSO" or whatever seems to be appropriate.

License regulations might require to send your callsign every 10 minutes, or so, in conventional CW in between.

As a QSO takes quite a while, this operating mode is ideal to do some other work besides, dor example soldering or reading, or even have a short dinner with your family while you transmit some information during the next 15 or 20 minutes.

Talking about family: my daughters, Jana (10) and Anina (7) use a graphical morse-alphabet to read the text, that is being transmitted:

The idea is to follow the path starting with the arrow on top. If the first part is a dash, go to the right. If the next part is another dash, keep on going right. Next part, for example is a dot, follow the dotted line. Last part is a dash again, so follow the solid line and you end up at the letter "Q". So --.- means "Q" (73 to the XYL of WK1V ... good luck in learning CW). Using Slow-CW there is sufficient time to use this chart, even if you do have no idea about the morse code! So this way of amateur radio can be very relaxing and the entire family can participate. 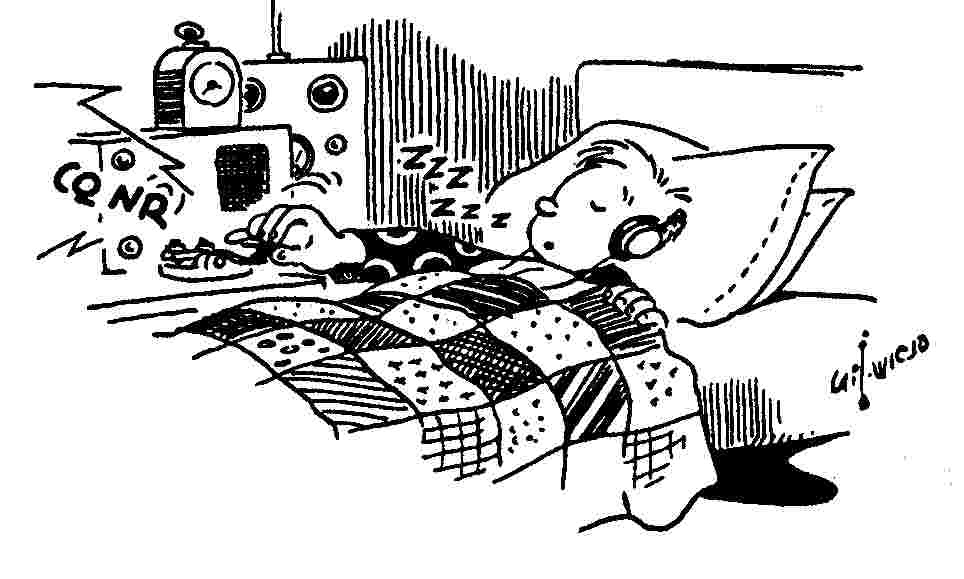