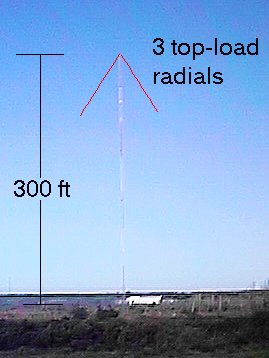 During my trip to Houston/TX in February 2000 I had an opportunity to have a look on how the commercials are dealing with antennas.
Dave, ZL3FJ had reported that the Galveston beacon GLS on 206 kHz has been frequently reported beeing received in VK and ZL. Michael, editor of "The European NDB Handbook" provided me with the exact coordinates of GLS to be N29°20'02.249" and W94°45'22.401" according to FAA information. By means of my handheld GPS receiver I had a nice trip from Houston to Galveston, receiving the beacon with my little ICF-SW07 receiver on the way.

I was surprised to see only three top radials, with isolators that clearly could be seen. Each the top-load radial is approximately 50 ft long and inclined downwards at an angle of 45 degrees.

The isolated mast of the antenna is 300 ft high (see photo) and is on the North-Eastern part of the Galveston island, very close to the sea. That might explain the excellent radiation and the reception of the beacon in the Pacific area.

For more information see this e-mail from Dave, ZL3FJ of March 2000:

Geri
Great to finally see a picture of the GLS antenna. Its top loading looks to
be  designed as outlined in Watt's 'VLF Engineering' where the drooping
umbrella wires are insulated off at a point such that they do not go below
about 70% of the vertical mast height.
Rick Warnett in P29  has been able to confirm its height at 300 feet and the
power as 2kw in correspondence- extract below from his very recent (today!!)
posting to the lofexp reflector.
At 300 feet it 's a biggie by NDB standards but as the distance down here
is over 12000 km it's still doing very well, possibly the best LF DX that I
am aware of, excluding high power broadcast stations. There's one of those
on the Kamchatka(?) Peninsula up top of the Pacific that roars in here in
winter months after dark on 180 kHz exact.

Fellow Lowfers,
The following was sent back to me in regard to GLS. MAYBE A BIT LATE NOW AS
OTHER COMMENTS HAVE BEEN MADE, HOWEVER.......

Got on the phone with the Galveston FAA field Office yesterday. GLS uses
a 300' verticle steel tower for the antenna. The entire tower radiates, just
like the usual am broadcasters. Power is confirmed @ 2000 watts. I talked
with a fella named Jimmy Grubbs, a Texan with the usual Texas drawl.
Friendly dude. They verify reports at:

I believe you folks would be the first from your area.